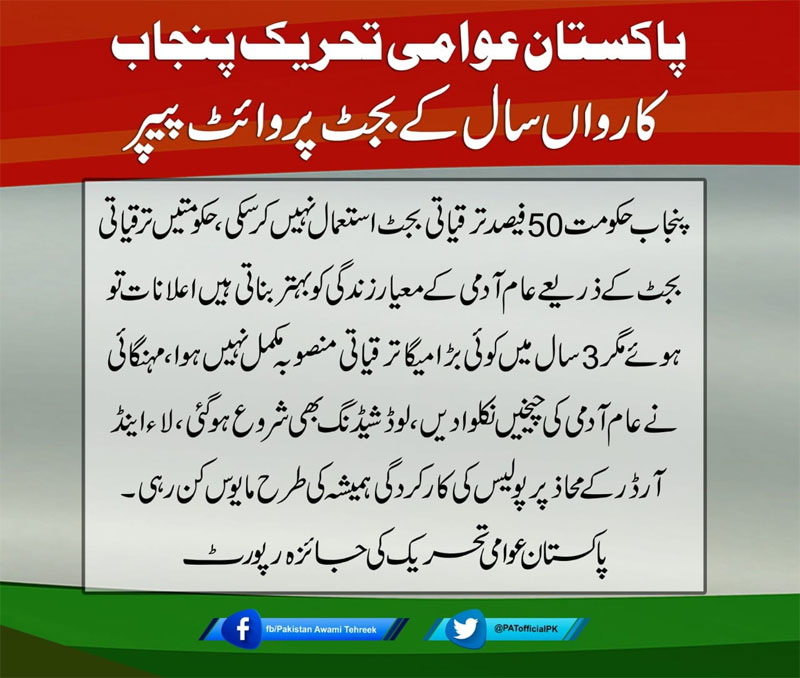 A special meeting of the PAT review committee on economy and finance was held here that was presided over by PAT Central Punjab President Basharat Jaspal. Issuing the review report about the development budget of Punjab, Qazi Shafique, Noor Ahmad Sahoo, Sultan Mahmood Chaudhry and Raja Zahid Mahmood, the members of the review committee, stated that the Punjab government could only utilize 50% of the development budget that raises a big question mark on the quality of governance in the largest province of the country.

The members of the committee said that the development budget is an instrument through which the government uplifts the standard of living of the common man and spends resources on upgrading the health and educational facilities. They said that the development budget for the ongoing financial year was Rs. 377 billion, which is already a peanut for a province of over 110 million people. They said that the Finance Department released Rs. 300 billion and imposed a cut of Rs. 77 billion on its own.

The PAT leaders said that out of Rs. 300 billion, Rs. 215 billion could hardly be used on the completion of various development schemes. In other words, the departments failed to utilize Rs. 85 billion of the allocated amount. They said that a province has failed to spend a whopping sum of Rs. 162 on the welfare of mases is in serious need of capacity building on administrative lines, adding that its chief executive deserves to be imparted training to improve governance and strengthen the administrative structure.

Provincial president Basharat Jaspal, while speaking in the meeting, said that while many announcements were made in the last three years, the government has however failed to complete any mega project. He said that roads constructed during the previous government have broken and need immediate repair. He said that the farm to market roads that ran into thousands of kilometers have been turned into ruins and no funds have been issued to repair them. He said that the destruction of physical infrastructure has created law and order problems.

Basharat Jaspal said that the current financial year witnessed highest rate of dearness in the history of the country. He said that the prices of eggs, and chicken have practically gone beyond the reach of the common man. He said that all indicators seem to suggest that the government is unable to stop the prices from increasing. He said that its performance in terms of maintenance of law and order has been equally dismal. He said that the number of killings during the dacoity registered an upward trend along with the increase in the incident of street crimes. He said that no headway has been made in the context of the provision of justice in the Model Town case during the incumbency of the present government.

PAT Central Punjab President further said that it appears that no serious steps have been taken to improve the administration of justice by fixing the loopholes in the investigation and trial phases. He said that the workers of different political and religious parties were subjected to torture in police custody, leading to death. The government did make a lot of noise for police reforms but the promise could not be materialized.

The review committee also expressed its serious concern on the increased load-shedding in different parts of the country. The members appreciated the various steps taken by the Punjab government to keep people safe during the ongoing Covid situation. They noted that it has made satisfactory arrangements for the vaccination of the people throughout the province.