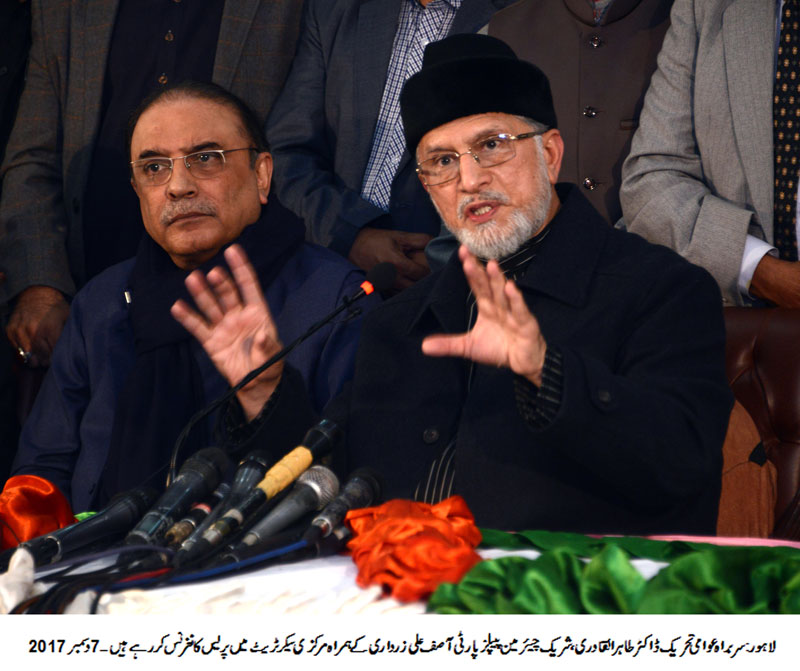 While addressing the joint press conference at the PAT central secretariat on December 7, PAT Chairman Dr Muhammad Tahir-ul-Qadri and PPP Co-chairman and former President Asif Ali Zardari said that Justice Najafi Commission report held the Punjab Chief Minister responsible for Model Town tragedy and he should immediately tender his resignation in the wake of publication of the report. Both leaders strongly condemned the Trump Administration’s decision to recognize Jerusalem as new capital of Israel and demanded a review of the decision. They said that peace process has been dealt a severe blow, adding that the decision violates the UN resolutions most glaringly.

PPP leader Asif Ali Zardari arrived at the central secretariat of PAT. He was accompanied by senior PPP leaders Sayyid Khursheed Shah, Qamar Zaman Kaira, Qayyum Soomro, Manzoor Ahmad Wattoo and Naveed Chaudhry. PAT Chairman received the guests along with the senior leaders of the party on their arrival at the secretariat.

Addressing the Punjab Chief Minister, Asif Ali Zardari said that there is no justification for Shahbaz Sharif to continue in office after he has been found responsible for Model Town massacre. He said that someone who is involved in the killings of innocent people cannot be accepted as a Chief Minister. He said that he is left with no option but to resign.

Asif Zardar said that we fully stand by PAT in its quest for justice for the families of martyrs of Model Town and whatever order Dr Tahir-ul-Qadri gives, we will comply with it. He said that actually 100 people lost their life, stating that in addition to 14 deaths, those who have been rendered incapacitated and injured for life, and unable to live like a normal human being, also represent a kind of social death. He said that we came to Model Town to express our solidarity with Dr Tahir-ul-Qadri on the tragedy. We will not only give our help but also receive help from him as well.

The former President strongly condemned the decision to relocate the US embassy to Jerusalem, granting it a status of new capital of Israel. He recalled that at the time of the meetings of heads of the Muslim countries in Lahore, former Palestinian leader Yasser Arafat had stated that the foundation of Palestine’s cause had been laid that day. He said that Dr Tahir-ul-Qadri and he will visit the world’s capitals to convince the leaders not to play with fire and let rationality prevail.

Dr Tahir-ul-Qadri said that appointment of new IG Punjab on the day of tragedy is proof of the fact that Nawaz Sharif is also involved in the planning of the massacre. He said that the report also mentioned that the armed contingent of police sent for the operation in the name of removal of barrier was much more than demanded by the situation and in comparison to the unarmed workers and there was no compatibility between both.

The PAT leader said that PPP always extended unqualified and unstinted support on the issue of Model Town. From burying the martyrs to the publication of the report, the PPP leaders stood by us.